When former world champions Shane Mosley and Ricardo Mayorga entered the ring to do battle in September 2008 both fighters were looking to position themselves for a potential world title shot in either the Welterweight or Jr. Middleweight division. In what was a competitive and close fight from start to finish both fighters were able to have periods of effectiveness. It was Mosley however, who was able to score a dramatic knockout in the final second of the final round to win the fight. Mosley would go on to defeat Antonio Margarito for the WBA Welterweight world championship in January 2009.

Mosley’s victories over Mayorga and Margarito solidified his status as a future Hall of Famer in the sport. Following his victory over Margarito however, Mosley would begin to see what some may argue was a gradual decline in his career. Mosley would go on to lose to the likes of Floyd Mayweather, Saul Alvarez, and Manny Pacquiao. In between those fights Mosley earned a draw against former WBC Jr. Middleweight world champion Sergio Mora and a victory against longtime contender Pablo Cesar Cano in May 2013.

In his last fight in November 2013 Mosley would suffer the first knockout loss of his career when he was stopped in seven rounds by former world champion Anthony Mundine in Sydney, Australia as the fight was stopped due to an injury to the lower back of Mosley. Some readers may recall my coverage of that fight in saying that it was my opinion that the loss to Mundine appeared to be the end of a great career for a fighter who has won five world championships in three different weight classes. Mosley would announce his retirement one week following his fight with Mundine.

The forty-three year old Mosley will return to the ring on Saturday night August 29th at The Forum in Inglewood, CA. Mosley’s opponent for his first fight in nearly two years will come in the form of a fighter whom Mosley knows all too well. Former two-division world champion Ricardo Mayorga.

Following his loss to Mosley in September 2008, Mayorga would score a ninth round stoppage of Michael Walker in December 2010. This would lead Mayorga to his battle with then WBA Jr. Middleweight world champion Miguel Cotto in March 2011. The always “Game” Mayorga was stopped by Cotto in the final round of what was an entertaining fight. Following the loss to Cotto, Mayorga opted to walk away from the sport of Boxing to try his hand at the sport of Mixed Martial Arts (MMA).

After four fights as an MMA fighter in which Mayorga compiled a record of 0-3, with 1 no contest, Mayorga returned to Boxing in September of last year stopping an over matched journeyman named Allen Medina in just sixty-three seconds of the first round. Mayorga would score a second victory in his comeback in scoring a fifth round knockout of Andeik Saralegui in December of last year. Although Mayorga has scored two victories in his comeback thus far, it is important to note that the combined record of his two opponents was 16-24-1, with 7 Knockouts.

Even though Mayorga’s recent opposition can best be described as lightly regarded, it is important for fighters who are attempting to come back after a significant absence from the sport to be active and hopefully get some wins under their belt before taking on higher level opposition.

The rematch between the two however, was nearly halted by Mayorga’s longtime promoter Don King, who attempted to stop the fight from happening by seeking an injunction against Mosley in court. Mosley, who is also promoting the card headlined by himself and Mayorga however, was successful in getting the go-ahead for this fight to take place as scheduled.

The legal battle between Mosley and King has for the moment been put aside as Mosley turns his attention to his battle with Mayorga. The two fighters, who have a strong dislike for one another got into a well-publicized scuffle at the final pre-fight press conference earlier this week. Whether the scuffle was a result of legitimate bad blood between the two or something that was meant to help promote the fight is a subject for debate.

The question that I have going into this fight is what versions of the two fighters will show up. At his best Shane Mosley is a fighter who has a good mix of hand speed, punching power, and the ability to execute his offense in combination. Mayorga meanwhile, has only one objective and that is to turn his fights into an all-out war. The forty-one year old Mayorga has never been the most technically sound fighter, but he is always dangerous due to his unorthodox brawling style which has caused many an opponent difficulty throughout his career including Mosley.

An argument can be made that the winner of this fight will likely move on in their comeback, while the loser will likely be sent back into retirement. Perhaps the more intriguing question however, will not be who wins this fight, but rather how well this card does both in terms of attendance as well as on television.

The fight, which will headline a pay-per-view broadcast will face competition as it will go head-to-head against a card televised by ESPN, which is taking place at the nearby Staples Center headlined by a Featherweight bout between former world champions Leo Santa Cruz and Abner Mares as part of the popular Premier Boxing Champions series. Although we live in an age where there are digital video recorders and other advances in technology, it is logical to assume that Mosley, who is promoting the card under his promotional company Sugar Shane Mosley Promotions could face an uphill battle.

Although some might say that both Mosley and Mayorga are past their peak at this stage in their respective careers, the rematch is nevertheless an interesting fight between two fighters who have been more than willing to take on all comers throughout their careers. Whether or not the rematch will resemble anything like the first encounter remains to be seen. After a legal battle that threatened the fight, and a scuffle at the final pre-fight press conference, this observer hopes that the end result will be what Boxing fans love to see. A great fight between two fighters who are attempting to resurrect their careers one more time.

Mosley-Mayorga II takes place Saturday, August 29th at The Forum in Inglewood, CA. The card will be televised on a cable/satellite pay-per-view basis in the United States and Canada for $49.95. Contact your local pay-per-view provider for ordering information. The card will be available in the UK and Ireland on BoxNation. Check local listings.

Press Release: July 4, 2020 By Dragon Fire Boxing - The Man Known as “The Macedonian Machine” Trajche Ilioski will be making his pro debut ... 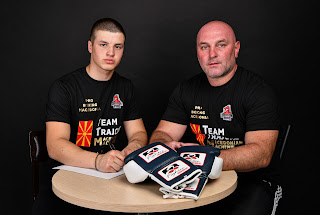