WBC Jr. Featherweight world champion Rey Vargas scored a twelve round unanimous decision over former WBO Bantamweight world champion Tomoki Kameda on Saturday night at the Dignity Health Sports Park in Carson, CA. In what was the fifth title defense for Vargas n front of a crowd of supporters, Kameda was the one who pressed the action throughout the fight. It was a tactical, but high-paced battle between Vargas’ greater volume of punches and Kameda’s ability to land solid flush punches throughout. Kameda was able to establish his overhand right in the early rounds that he was able to land flush to the head of the champion. The challenger’s moments in this fight appeared to come in short, yet compact spurts that were attention grabbing and may have been able to sway opinion as to who was getting the upper hand in some particularly close rounds to score.

Vargas was most effective when he was able to use his three-inch height and near four-inch reach advantage to use his jab, throw combinations, and get his punches off first. When it comes to close fights like this as this observer has said frequently over the years, the challenge for those scoring the fight is to determine which fighter was more effective during their respective spots of success over the course of the fight.

While he did not always land his punches cleanly, the champion did have the edge when it came to being more active than the challenger. Although this is not always the sole determining factor, it can and often does leave an impression on the three official judges who are scoring the fight. Although Kameda did apply consistent pressure on Vargas and did land the harder punches in my view, he was inconsistent in throwing his jab to close the distance between himself and the champion. This along with Vargas’ greater activity and ability to consistently throw combinations became the story of the fight in my eyes.

Kameda was deducted a point by Referee Jerry Cantu in the twelfth and final round for hitting on the break when being separated from a clinch. An illegal move by the challenger that Cantu also verbalized as unsportsmanlike conduct as his reasoning for penalizing Kameda. The point deduction against the challenger sealed the unanimous decision victory for Vargas as all three judges scored the fight 117-110 or nine rounds to three in his favor with the contributing factor of the point deduction in round twelve against Kameda.


Also on this card, in a battle for the NABF Jr. Featherweight championship former world title challenger Ronny Rios dethroned previously undefeated Diego De La Have by stopping him in the sixth round. The fight was an all-out war from the opening bell with both fighters going toe to toe and each having periods of success. Rios however, would finally get the upper hand dropping De La Hoya for the first time in his career with a left hook to the body followed by a glancing right uppercut to the head. De La Hoywas able to beat the count, but informed Referee Rudy Barragan that he did not want to continue. Official time of the stoppage was 1:17 of round six. Ronny Rios advances to 31-3, with 15 Knockouts. Diego De La Hoya falls to 21-1, with 10 Knockouts.

In a bout for the vacant WBA Continental Americas Featherweight championship, undefeated prospect Joet Gonzalez scored a sixth round stoppage of a very “Game” Manuel Avila. Although Avila appeared to be getting the better of the action early in the fight, the pressure and heavier blows from Gonzalez gradually wore him down. A brutal combination to the body and head put Avila down late in round five. The punishment only accelerated in round six and as Avila continued to sustain significant punishment with no success in being able to keep Gonzalez off of him, his corner threw in the towel to save him from further damage. Official time of the stoppage was 2:27 of round six. Joet Gonzalez advances to 23-0, with 14 Knockouts. Manuel Avila falls to 23-2-1, with 8 Knockouts.

WBA number nine rated Jr. Lightweight contender Roger Gutierrez scored a major upset over previously undefeated WBC number three rated contender Eduardo Hernandez. A flush right hand to the temple sent Hernandez down hard in the canvas in round one. Hernandez gamely tried to get to his feet, but could not get control of his legs and the fight was stopped by Referee Rudy Barragan at 2:39 of round one. Roger Gutierrez advances to 22-3-1, with 18 Knockouts. Eduardo Hernandez falls to 28-1, with 25 Knockouts.

In a bout for the WBC Continental Americas Welterweight championship undefeated prospect Alexis Rocha scored an eighth round stoppage of Berlin Abreu. From the opening bell the fight was fought on the inside with Rocha staying pinned to Abreu’s chest. The constant body/head attack by Rocha gradually broke Abreu down and Referee Jack Reiss halted the fight at 2:56 of round eight. Alexis Rocha advances to 14-0, with 9 Knockouts. Berlin Abreu falls to 14-3, with 11 Knockouts.

In the Jr. Welterweight division, rising prospect Ruslan Madiyev scored a hard-fought eight round unanimous decision over veteran Ricky Sismundo. Although Sismundo appeared to suffer an injury to his right shoulder in the second round, he managed to give Madiyev a very difficult fight due to his head movement and combination punching. Madiyev however, was able to land the harder punches throughout the fight. Official scores were 79-73, and 78-74 (on two scorecards) in favor of Madiyev. Ruslan Madiyev advances to 13-1, with 5 Knockouts. Ricky Sismundo falls to 35-14-3, with 17 Knockouts.

Undefeated Lightweight prospect Jousce Gonzalez scored a second round stoppage of a “Game “, but overmatched Jorge Pedron. Gonzalez scored two knockdowns in the first round and then sent Pedron down for a third time with a short left hook to the head forcing Referee Jack Reiss to stop the fight at 2:15 of round two. Jousce Gonzalez advances to 9-0-1, with 9 Knockouts. Jorge Pedron falls to 3-4, with 3 Knockouts.

Following his victory over Tomoki Kameda, a decision that was widely booed by those in attendance, Vargas called out current WBA Jr. Featherweight world champion Daniel Roman for a unification bout in the 122lb. division. Whether or not that fight happens in the near future remains to be seen, but a fight between the two would certainly be a draw wherever it takes place, especially if it were to take place at the venue now known as Dignity Health Sports Park in Carson, CA. A venue that has seen several name changes over the years, but a site of many memorable nights of Boxing in the state of California over the years. With this card headlined by what was a competitive bout between Rey Vargas and Tomoki Kameda now in the books and added to the lengthy history of Boxing in the outdoor stadium, the next significant night of Boxing in Carson, CA just might be headlined by a Jr. Featherweight unification clash between Rey Vargas and Daniel Roman.

“And That’s The Boxing Truth. 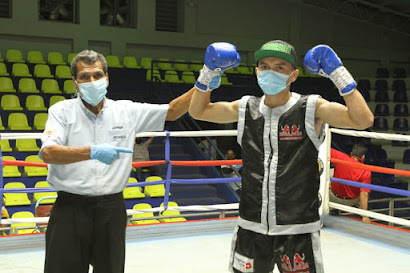