Rising Middleweight prospect Anthony Fowler scored a hard-fought ten round decision over former British Jr. Middleweight champion and former world title challenger Brian Rose in the main event of the latest edition of Matchroom Boxing’s NXTGEN Boxing series on Friday night at the Exhibition Centre in Liverpool, England. In what was an entertaining fight throughout, It was Fowler’s quick hands and harder punches that were the story of the fight. Rose was able to have his moments throughout the bout and hard success in landing his right hand to the head of Fowler. The pattern of Rose’s success in the fight however, was whenever he would land solidly with his punches, Fowler would almost immediately return offense with combinations that consistently pushed Rose back. It was this along with Fowler’s ability to bring the fight to his opponent that resulted in a convincing decision victory.


In a battle for the English Middleweight championship, Jack Cullen scored an impressive eighth round stoppage of previously undefeated John Harding in the first defense of his title. Cullen dominated the fight almost from the start landing jabs, straight, right hands, and left hooks on a very “Game” Harding. Cullen scored a technical knockdown of Harding in round five with what appeared to be a left hook that caused Harding’s glove to touch the canvas. In round eight, a body shot from Cullen staggered Harding and forced him against the ropes. A follow-up barrage subsequently forced a stoppage of the fight at 2:07 of round eight. Jack Cullen advances to 17-1, with 8 Knockouts. John Harding falls to 7-1-1, with 1 Knockout.

In the Bantamweight division veteran Thomas Essomba scored a hard-fought ten round decision over previously undefeated Sean McGoldrick. Several of the rounds in this fight were fought in close where both fighters engaged in exchanges. As the fight progressed, Essomba’s greater activity and sharp counter punches became the story as he earned what will likely be viewed as an upset victory. Thomas Essomba advances to 9-5, with 3 Knockouts. Sean McGoldrick falls to 9-1, with 2 Knockouts.

The victory for Anthony Fowler over Brian Rose was a convincing bounce back win for the native of Liverpool, England, who suffered his first professional loss in his last fight in losing a ten round split decision to Scott Fitzgerald in March of this year.

As had been the norm, Matchroom Boxing’s NXTGEN series offered an interesting look at some of the rising prospects on the UK Boxing scene. While some fighters who were featured on this card appear to be closer to taking another step towards potential British, Commonwealth, and perhaps even world title opportunities, the fighters will likely benefit from the global exposure the series offers as they look to continue progressing in their respective careers. 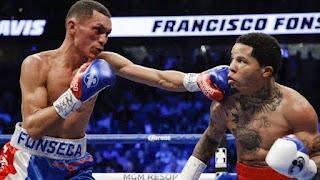